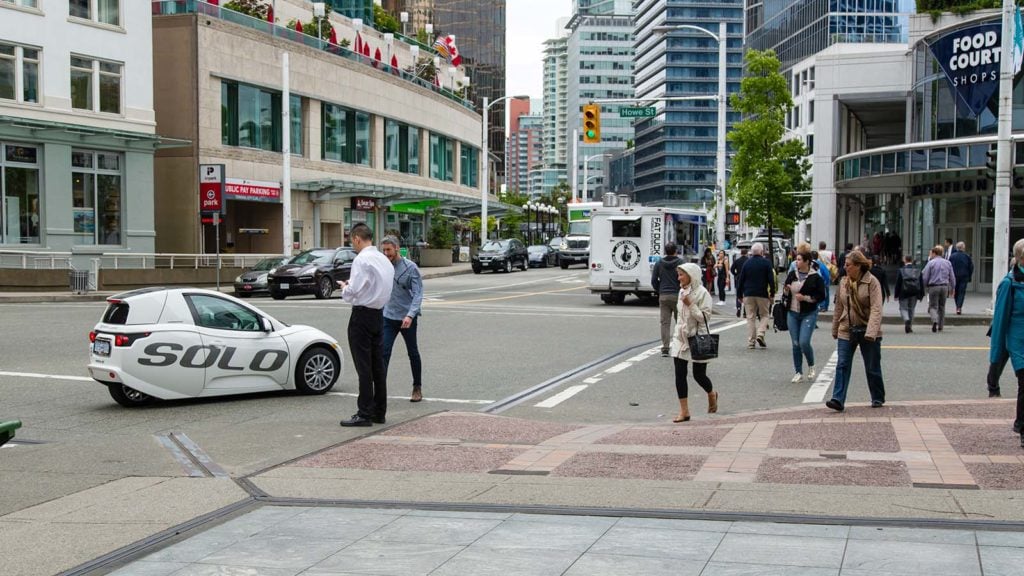 Small cars have never sold well in the United States. ElectraMeccanica (NASDAQ:SOLO) – an electric vehicle pioneer that is on the cusp of bringing a purpose-built, single-seat, three-wheel electric car (dubbed Solo) to market in late 2020 – hopes to change this reality and sell a bunch of “tricycle” EVs over the next few years. If the company does that, SOLO stock will turn into a 1,000% winner. This will be mostly because ElectraMeccanica’s valuation today hovers at a mere $175 million (versus $10+ billion valuations for traditional, four-wheel EV makers).

Of course, that’s a huge “if.” After all, it’s never happened before. A small car has never sold well in the United States.

But times are changing, and thanks to fundamentally shifting demographic and economic trends, ElectraMeccanica’s Solo car has a compelling opportunity to be the first mainstream and widely successful small car in America.

Of course, that also means SOLO stock has a compelling opportunity to be your next 1,000% winner – and this blockbuster journey will all start in just a few months.

So, hold your horses. What comes next for SOLO stock could jolt you out of your seat.

A New Era of Car Buying

Yes, it’s true that small cars have never sold well in the U.S. Suzuki in the early 2010s. The Toyota Scion iQ in 2015. Mercedes’ mini-Smart Car in 2019. None of them sold widely and none of them are sold new in the U.S. today.

This shift toward a new era of car buying is predicated on a shift in who is buying the cars. The prospective car buyer demographic has traditionally been dominated by older folks and families, who live in spacious suburban neighborhoods, with sizable incomes and good credit, and who don’t care as much about saving the environment. That crowd likes, needs and can afford bigger, gas cars.

But the prospective car buyer demographic in the 2020s will increasingly include a larger and larger number of young, single folks, who live in urban neighborhoods, with smaller incomes and shaky credit, and all of whom are hyper-obsessed with climate change – a crowd for which small, single-seater, cheap electric cars are an optimal solution.

Why the shift in car buyer demographics?

Because for years and years, those young folks put off buying cars. They relied on ride-sharing to get around. But the novel coronavirus pandemic shook their faith in ride-sharing. This came around the same time that their purchasing power and commitment to environmental friendliness are meaningfully growing.

The result? Young consumers are finally entering the car market, so much so that they are turning into the driving force of the auto market these days. These young consumers want small cars. They want cheap cars. They don’t need SUVs. And, above all else, they want electric cars.

Who sits at the overlap of all those features? ElectraMeccanica, with its sub-$20,000, single-seater, electric Solo car.

Importantly, ElectraMeccanica is more that just a Solo car concept. The company is executing strongly against its growth roadmap. It is accelerating business momentum today, and clear visibility to bringing these cars to market very, very soon.

Specifically, ElectraMeccanica has finalized design of the Solo car, and started mass production of the vehicles in China in August. Deliveries are expected to commence by late November to early December.

At the same time, ElectraMeccanica has three retail locations in U.S. markets which have a high number of potential Solo car buyers: Los Angeles, Phoenix and Portland, Oregon. These locations should help drum up brand awareness, and allow for demand of Solo cars to build over the next few months alongside ramping supply.

Plus, ElectraMeccanica has finalized design on its Solo utility and fleet vehicle, which is a modified version of the original Solo car that is purpose-built for the food delivery, small parcel and post distribution end-markets. This vehicle is expected to hit the market in early 2021, and potential commercial adoption here could be enormous. It was offer the clear value-prop of a single-seater, cheap EV with sufficient cargo space to last-mile delivery and security companies, as well as first responders.

Overall, the long-term bull thesis on SOLO stock has never been so clear and compelling – and it will all start to come to life in less than two months.

ElectraMeccanica’s order book back in late 2018 included over 64,000 pre-orders, totaling about $2.4 billion in revenue. I think it’s very likely that – by 2030 – ElectraMeccanica is selling about 50,000 of these Solo cars per year.

At the current SOLO stock price, the company is worth just $175 million in late 2020.

That $1.4 billion market cap doesn’t include any upside from the company’s Tofino concept, or the eRoadster concept. The latter looks like it could a huge seller given that it’s the first EV concept which blends electric technology with vintage car design.

All in all, then, SOLO stock has more than 1,000% upside potential over the next decade.

The long-term growth narrative on ElectraMeccanica has never looked so good. And that growth narrative – which, to-date, has been just a vision – is just two months away from materializing into a tangible reality.

The investment implication is that SOLO stock is just two months away from starting on an enormous, multi-year upward trajectory in which the share price could rise more than 1,000%.

So, if you’re looking for the “next big thing” in EVs, I’d say it’s time to start seriously considering SOLO stock.

The New Daily 10X Stock Report: 98.7% Accuracy – Gains Up to 466.78%.  InvestorPlace’s brand-new and highly controversial newsletter… is rocking the industry… delivering one breakthrough stock recommendation each and every trading day… delivered straight to your inbox. 98.7% Accuracy to Date – Gains Up to 466.78%. Now for a limited time… you can get in for just $19. Click here to find out how.